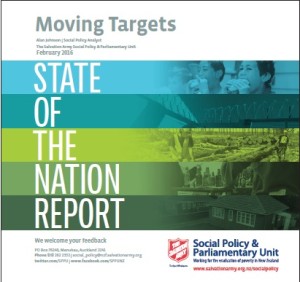 Salvation Army’s annual State of the Nation report is out and aptly named. Moving Targets covers a wide array of information. Targeting in on the state of social policy in key areas, the Social Policy and Parliamentary Unit also highlights the ‘movable feast’ of governmental reporting.

The report has this to say about the name:

“On the one hand, it is an allusion to the way in which some government agencies appear to be using targets and the numbers behind them in a less than straightforward and reliable manner. This practice has many subtle and ingenious approaches – ranging from changing the definitions behind indicators so results appear better, to inventing new numbers like pseudo-service level indicators that are dif­ficult to verify and have no point of reference, to simply changing report­ing formats in the name of improving accountability without any improve­ment in the reliability of the informa­tion provided.”

Plateauing since 2010, the number of children living in poverty is 222,000. That the economy has grown by over 13% in that time is another re­minder that much more needs to be done. Substantiated child abuse and neglect cases have dropped though re­ported cases have increased.

Despite making up 16% of the popu­lation, Māori make up 56% of those in prison. The number of inmates across the country hit an all time high over 2014/15, with the total reaching an average of 8,732. While there was a drop in the rates of reoffending over the 4 years pre­viously, recidivism is starting to rise again.

The number of people unemployed has stayed largely the same for the last five years, and the amount of jobs created last year fell to 20,000. There are 1 million New Zealanders over 18 receiving government income assis­tance, and of that 1 million 700,000 are receiving superannuation or vet­erans pension.

Falling from an average of 10.2 to 9.3 litres per person since 2010, the consumption of alcohol has dropped. Road deaths attributable to alcohol have stayed more or less the same, currently at or around 13%. Interestingly, the number of convic­tions for drug offences has dropped by 40% since 2010.

In housing, rents continue to rise faster than wages and salaries and house prices continue to soar. Every indicator in housing is at an all time high, with years of average wage/sal­ary required to purchase a median value house now at 8 nationally and 12.9 in Auckland.

The overall conclusion to draw from the report is that while there are some hopeful signs of progress, overall not enough is changing fast enough to make a meaningful dif­ference to reduce poverty, improve housing or reduce social hazards.

Read the full report on the Salvation Army website.