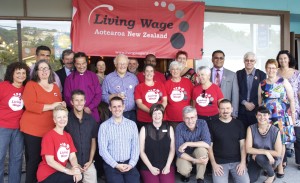 Living wage employer La Boca Loca hosted the announcement of the 2015 revised living wage rate on 24th February. The Wellington living wage campaign supporters joined in the fun to celebrate the success of the movement in lifting wages for low income workers. We were also there to continue to our commitment to a fun-filled and positive vision for workers in this country that has changed the debate about wages from ‘how low can you go’ to ‘what is the best we can do for workers and their families.’

It is surely no coincidence that the Government announced a 3.5% increase in the minimum wage or 50 cents per hour the very next day, thereby actually closing the gap between the living wage by 5 cents an hour! Would the increase have been this much without the pressure to lift low wages, with inflation at 0.8% and average earnings rose by 2.5%? A minimum wage of $14.75 per hour is still too low, $4.50 per hour ($180 per week) less than the living wage, that is based on what workers and their families need to get by and participate in our society. Read more about the 2015 update for the Living Wage and listen to Anglican Bishop of Wellington Rt Rev Justin Duckworth talk to Mark Sainsbury about what the Living Wage means for us. 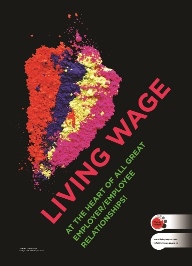 Take Action to Support the Living Wage in Wellington and make a submission to the Council Long Term Plan (submissions due on 17th April).

Find out more about becoming an accredited Living Wage Employer