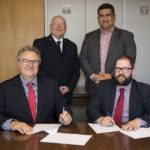 It’s a first and it’s great news for those amongst us on very low incomes and who struggle to pay housing costs.

For the first time the income related rent subsidy,which is based on 25% of income, is being offered to council housing through a new partnership between Wellington City Council (WCC) and Salvation Army.

It’s early days but there is hope that this partnership may go on to inspire other such partnerships around the country.

In brief, people housed on the MSD social housing register will be housed in Wellington City Council units, which have a ‘income-pegged rents’.

There are caveats. Only new tenants are able to apply.

The pilot is starting with two homes in Newtown, with the option of taking up to 20 houses, about 1 percent of the council’s 2200 units.

Although these initial numbers are small, the benefit of the policy change can already be seen.

Dr Greg Coyle, Manager of the Salvation Army Social Housing Unit, who was at the signing of the first two tenancies said.

“the biggest demand was from older, single people, many who have fallen out with their families, struggled with addiction or have been released from prison.

“Not only would they receive a roof over their head and lower rent, but also wraparound services to help get them back on their feet”.

“We took a chap to an income-related rent property recently. He’d been at the night shelter a lot of time in the last few months. We put him straight into a one-bedroom flat and he was absolutely delighted and his rent was about $55-60 a week from his benefit and he was right near the Salvation Army services.

“He just said, ‘wow I can’t believe that this is a place that I could live in.”

NZCCSS is hopeful this model will be replicated around the country so that we can report many more stories on the benefit of income related rent subsidies to a wider number of people of low income.