Housing Of All Kinds

Like houses themselves, housing solutions take many shapes and sizes.

Two completely different stories emerge, for instance, from the experience of Wesley College in the North Island – about to give birth to a ‘new town’ – and the complex housing needs being taken on by the Christchurch Methodist Mission. 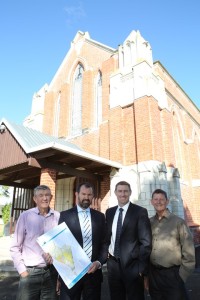 As general secretary of the Wesley College Trust Board Chris Johnston has had a long association with the college – at Paerata, north of Pukekohe – and is in the driver’s seat for a property development he’d happily call a dream come true.

A rural setting brings lots of blessings, but paying the bills to keep colleges running is never easy. Hence a plan had been on the drawing board over the last decade to roll a majority of Wesley College’s site and adjoining land into a housing development at a town-sized scale of 4500 sections.

Something that sets the development apart is that it will be carried out by Grafton Downs Limited – a charitable company within the Methodist Church of New Zealand under the Auckland Housing Accord, which was developed by Auckland Council and the Government to address Auckland’s housing shortage.

Chris readily acknowledges that between the accord and a move away from silo-based council processes the development has had an easier path to market, with years shaved off the timeframe for plan variations.

“The current Housing Project Office has been a real ally within council. Our goals are their goals,” says Chris.

Over the next 15 to 20 years a new town will rise up, possibly to be called Franklin, with plans for terraced homes, apartments, stand-alone houses, a primary school, high school, retail developments, green spaces, natural reserves and a retirement village – all interlinked with cycle, walking trails and public transport.

The sale of the sections will help secure the school’s future and fund the rest of the development. At the same time most of the college buildings, barring the historic chapel and a handful of newer buildings, won’t remain, and the college itself will relocate to a yet-to-be-determined nearby site.

THE NEEDS OF THE MOST VULNERABLE

Meanwhile at the Christchurch Methodist Mission (CMM), the challenges of providing housing that meets the needs of the vulnerable has been a higher and higher priority.

CMM’s involvement in housing for older people dates back to the 1970s, but a side-effect of the Christchurch earthquakes was a sharp realisation of the heightened needs of renters and homeless young people and families.

Jill Hawkey, CMM executive director: “Very little has been done for vulnerable people in rental accommodation, with the results being a whole lot of transience and people doubling up under the one roof or even sleeping in cars in driveways”.

“We are well placed to respond, and when I met with social workers the nexus of other issues would all come back to the quality of housing”.

“The situation in Christchurch is calming, but it hasn’t been getting easier,” says Jill – citing the phenomenon of higher market rentals set by landlords who consider repairs to be the same as ‘doing up’ a house.

Jill believes a simple answer could have been a short-term increase to the Accommodation Supplement in Christchurch to address disparities. Instead she observed that renters were not being listened to, and solutions were skewed more to home owners.

In the context of ongoing social housing reforms CMM has adopted a firm stance that it will not be engaged in any way with the selling off of State housing.

In accepting that the complexity of housing issues is too large for any one organization, the work of CMM in Christchurch has been about building many positive alliances – importantly, for instance, with the Christchurch City Council and for youth housing the Youth and Cultural Development Society, better known as YCD.

CMM and YCD have one house for homeless youth up and running, with another to follow.

“Our vision is that no young people are living on the street who don’t want to,” says Jill.

“What we bring to this partnership is what it takes to be a tolerant, long-suffering landlord (and) I hope we work together for years to come”.

“CMM is committed to providing warm, secure and affordable housing. Housing homeless young people and families is a demonstration of this commitment. Yes it comes with risks and it will no doubt come with challenges. But in accepting these challenges we are also accepting that homelessness (in all forms) exists in our community and we intend to do something about it”.