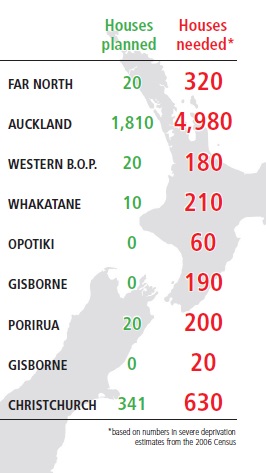 The Ministry of Social Development (MSD) has announced social housing purchasing intentions for the next two – three years. The intention is to purchase around 2,850 extra places. This compares with total known need at 31 March 2015 of 4,808 (social housing register) and total severe housing deprivation estimated at 33,946  people (in 2006, the most recent data) needing between 12,000 – 20,000 units to house them.

Breaking it down by region exposes just how pitifully small the planned growth is in comparison to the identified high need. In Porirua MSD plans to purchase an additional 20 one bedroom places, there were 52 on the social housing register at 31 March 2015 (Priority A & B). The regional breakdown in of “Severe Housing Deprivation” estimates a total of 608 people in severe housing deprivation (using 2006 Census data) in Porirua. In short, probably something like two – three hundred new social housing places would be needed in Porirua simply to have any impact on severe housing deprivation.

Looking at the centre of the housing crisis in Auckland – the purchasing intentions of 1,810 places might get close to meeting the current registered need of 2,537 applicants, but that pales in comparison to the nearly 15,000 people in severe housing need.