Getting inequality and poverty issues “much more in the public eye” in recent times has been a notable success. 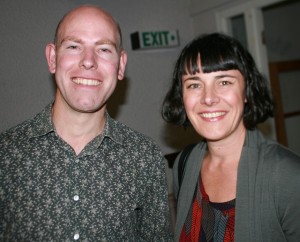 Reflecting on that success was part of the topic taken up by journalist and author Max Rashbrooke and Action Station dynamo Marianne Elliiott when they spoke at a Fabian Society event in Wellington on Monday 14 September.

The bigger part of their public talk wasn’t about resting on the laurels of that success, but rather about picking up the challenge of becoming “far more effective communicators about these issues”.

Max, who will be well known to readers of Kete Kupu for his work on the books Inequality: A New Zealand Crisis and The Inequality Debate: an Introduction, was a recipient this year of a 2015 Winston Churchill Fellowship to examine the debates in the UK around poverty and inequality.

In particular he was looking at the question of how we talk about poverty and inequality: why the things we say don’t reach all of the public, and what to do about that.

Max: “The starting point for a discussion on inequality and poverty is often to begin with an amorphous, vague understanding. What it is.. how big it is.. what’s causing it.. what the solutions are..”.

“The trouble is that just deluging people with facts, when facts only make sense in a context or wider narrative, doesn’t really address the deep mental framing people place around their sets of values and beliefs. Isolated facts bounce off”.

Max also pointed out that too much use of ‘myth busting’ can be just as problematic as dishing up only numbers and statistics – because raising myths or misunderstandings about inequality and poverty\may just serve to remind people about prevalent stereotypes and confirm unconscious prejudices (including the one he hears the most: poor people shouldn’t own TVs).

Having suggested people at the talk be prepared to “abandon any cherished beliefs (you might hold) hold about effective communications”, Max proceeded to cover how better understanding the attitudes of the public at large requires taking motivational values into account from the start, and being respectful of the fact that for a lot of people their political values – left, centre or right – are their moral ground too.

Resisting an obsession with getting the messaging spot on all the time is a challenge.

While words and metaphors matter enormously, Max counselled there has to be a good degree of flexibility and adaptation and narrative application in the way we use them, to make them “concrete and relatable”. It might be easier for example to reconcile inequality and poverty in New Zealand by talking about imbalances and barriers, hardship and need.

Marianne, a hugely experienced human rights advocate, turned her attention to recent Action Station campaigns and reinforced Max’s point that “it’s incredibly important to understand where people are coming from”.

She spoke about being aware of the constant “toggling” that people do “between different stories and views of the world” in order to make sense of issues, and within the context of their own life experiences. One aim of campaigning could be seen as the work needed to “shift and hold” that toggling.

Marianne observed that talking about inequality and poverty runs up against especially deeply ingrained and prevalent notions of the economy as a moral enforcer – punishing bad behaviour (eg. being unemployed) and rewarding good behaviour (eg. being well paid). And because the metaphors often present the economy as a force of nature, woe betide anyone who is standing in the way of that force.

Marianne closed by saying that a powerful framing for inequality and poverty, when backed with big deliberate interventions, is to to get to a point where it can be accepted that the issues “are not inevitable… they’re alterable”.