Homelessness: not so invisible any more

Home/Uncategorized/Homelessness: not so invisible any more

Report of the Inquiry into Homelessness 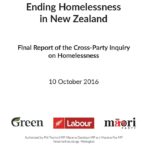 For many years homelessness in New Zealand has been very much the invisible housing problem. NZCCSS and many other groups have called attention to the extent of the problem and for effective action to reduce homelessness. The generous and effective emergency response of Auckland’s Te Puea Marae earlier this year and some sustained mainstream media attention has awakened more New Zealanders to the extent of the issue. It represents the “sharp end” of the housing crisis.  With nearly 42,000 people affected by severe housing deprivation: living in cars, garages, sheds, camping grounds, over-crowded homes or sleeping rough, the problem of homelessness has significantly increased in recent years. .

Three parties in Parliament (Labour, Greens, and Māori Party) set out to conduct an inquiry into homelessness after failing to get Government support for a full parliamentary inquiry. The inquiry members went around the country, starting at Te Puea Marae, to meet and listen to people affected by homelessness and to hear from those working with them about the kinds of effective responses needed to reduce homelessness. As well they received dozens of written submissions.

On 10th October, World Homelessness Day, the Homelessness Inquiry report, Ending Homelessness in New Zealand, was presented at Parliament. Hurimoana Dennis from Te Puea Marae spoke at the report’s release and pointed to the fact that Māori are disproportionately affected by homelessness and this is large a gap in the response to homelessness currently. The marae became a meeting point for people experiencing homelessness and the agencies and social services that could offer help. The other speakers spoke of the need to respond quickly and effectively to the crisis of homelessness.

The four main recommendations of the report are to:

The full report is on the website of the Homelessness Inquiry.