The inequality gap: no worse is still very bad

“Just because there’s been a suggestion recently that the inequality gap in New Zealand hasn’t grown since the global economic crisis, we shouldn’t make the mistake of thinking it’s not bad”, says Trevor McGlinchey, Executive Officer of the New Zealand Council of Christian Social Services (NZCCSS). 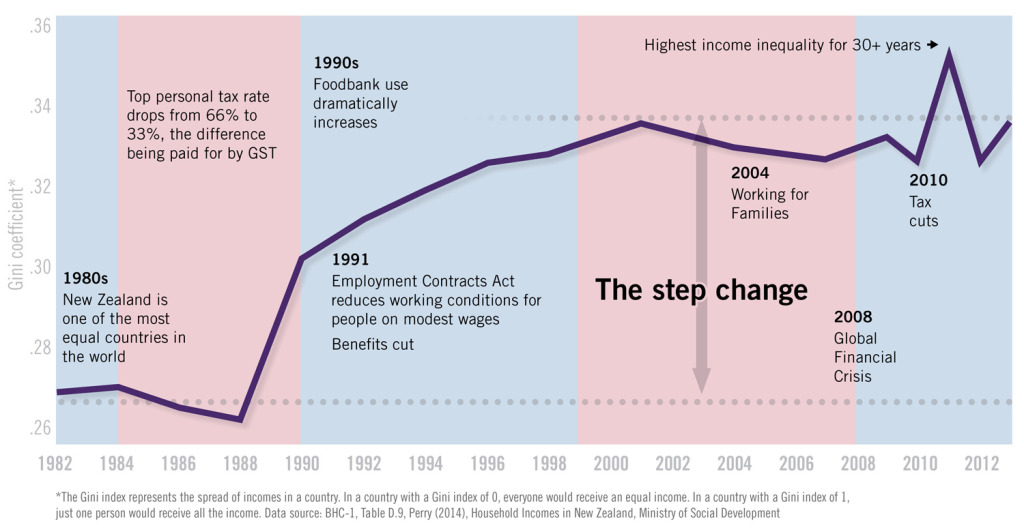 How can New Zealanders be content with such a big income gap between the rich and the rest? The extent of that disparity, compared to the 1980s, is truly frightening.  “All that means is that our present appalling level of inequality is being set in concrete. This is a very bad situation and one we shouldn’t tolerate.”

“Instead of feeling vaguely virtuous that things haven’t gone from bad to worse in the last couple of years, we should all be thinking about how to close the yawning chasm that has separated the rich from the rest in the 3 decades”, Mr McGlinchey says.

“Many people are working really hard and getting little in return. And it’s not as if they’re not doing their fair share. Every time a new supermarket opens, hundreds of people apply for the jobs. And those lucky enough to be in work are putting in more hours than ever.”

The problem is that people are battling a system in which the fruits of economic growth are largely going to those who already have the most. That bleak economic climate looks set to get worse. According to the Budget, the economy is forecast to grow by about 2.8% a year over the next five years – but wages will only rise by 0.8% a year. Ordinary people will once again be missing out.

“People on benefits are the most affected. That means hundreds of thousands of people with disabilities, people who are caring for ill or disabled family members and parents of young families”, says Mr McGlinchey. “They’re falling further and further behind everyone else because benefits aren’t adjusted to increase in line with the average wage.”

“We have a huge problem in front of us. There are plenty of ways we can respond quickly to make a difference and we should be demanding candidates in the general election give us innovative policies that will reduce the gap between the rich and the rest and recreate fairness for the twenty-first century.”