The Future of Tax – Give Your Views

Home/Uncategorized/The Future of Tax – Give Your Views 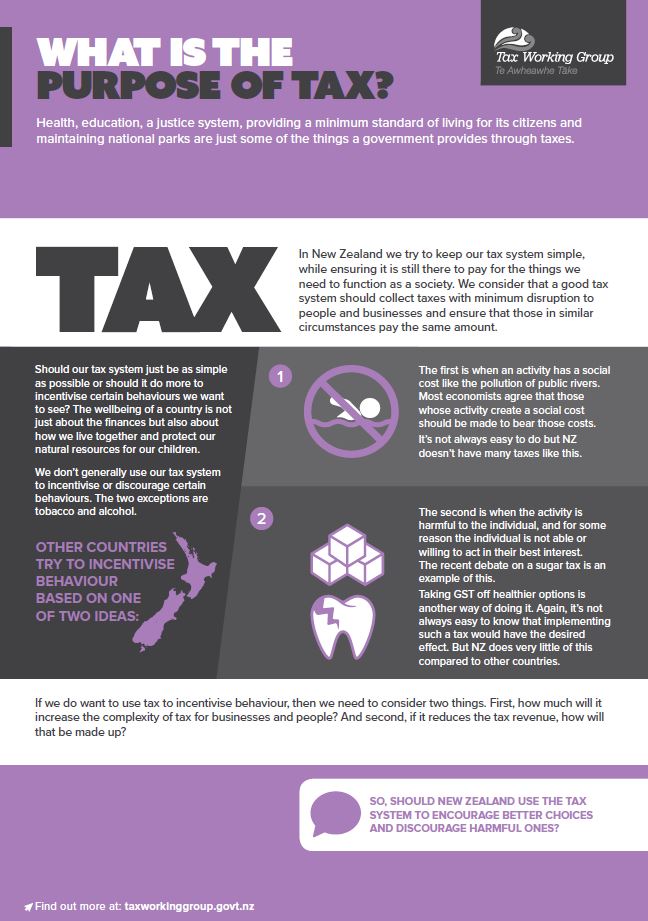 Tax is one of the ways that we as citizens of this country relate to each other. We seek to bring more justice and fairness to our communities, because we are all connected and interdependent. The wellbeing of all of us is bound up with the wellbeing of each person. Distortions and imbalances of income and wealth damage our ability to live well together as a nation.  The Tax Working Group (TWG) review is an opportunity to re-set our tax relationships towards a future where all can live well. The TWG’s clear focus on the four areas of wellbeing identified through the Treasury Living Standards approach is a welcome recognition by Government of the wider role taxation plays in enhancing wellbeing.

In 2017 the more than 30 groups in the Equality Network, released an Election Statement that called for “a tax on very high levels of wealth and higher top tax rates on the highest incomes to ensure that everyone contributes their fair share and enable our families and whānau to thrive”

The Election Statement also called for “fairer income support” and it is a fact that the interaction between the tax and welfare/income support systems has a large impact on poverty and inequality in this country.

Public concern about poverty and the gap between rich and poor remains high and the tax system plays an important role in reducing inequality by redistributing income from those who earn more to support those on lower incomes. The New Zealand tax system does not reduce inequality as much it used to and it also does not rate well in comparison to similar countries in redistributing income.

The absence of capital gains tax or other wealth taxes is the most obvious gap that undermines the overall fairness and consistency of our tax system, say tax experts like Lisa Marriott from Victoria University.  While it is not easy to tax wealth effectively, New Zealand needs to introduce a meaningful tax on personal capital income, inheritance taxes or an annual tax on individual wealth stocks net of debt.

It is not fair that those on the very highest incomes (e.g. over around $150,000) pay the same top tax rate as middle income earners (over $70,000). The tax system is much less progressive than it has been in the past, which has benefited the highest income earners the most. High income earners are also most likely among the larger wealth holders that also benefit from little or no tax on their wealth. Other similar countries have higher top tax rates (e.g. UK 45% for income above £150,000) and it is only fair that those earning the highest incomes contribute more to funding essential public services like schools and hospitals.

The tax and welfare system is crucial to ensuring the wellbeing of those facing disadvantage and vulnerability and/or living on low incomes. Children are particularly affected by the level of tax-funded assistance that is provided.

The amount that can be earned before welfare assistance is reduced and the rate at which welfare benefits are reduced when people manage to find additional paid employment mean that currently people on very low incomes often see very little extra income in the hand. This is also a problem for people in employment if increasing their incomes takes them above thresholds for income support payments such as Working for Families and the Accommodation Supplement.

Better rules are needed for combining welfare benefits and earnings to respond to the rise of casualised work. The complexities for people who combine irregular work with needing to access welfare benefits mean they can miss out on much needed support.

Secondary tax does not seem to work well for many people on low incomes. The combination of several low-paid jobs, often with irregular hours, effectively penalises people who are already earning very little in total. Having to wait for end of year tax returns or organising a special tax rate disadvantages people who are often already struggling.

Significant additional expenditure will be needed in the future to meet goals to reduce child poverty, reduce the imbalance in incomes and wealth, increase the supply of affordable housing, respond to growing needs in the health and education systems. A fairer tax system can meet these needs if it is well-designed and draws revenue from currently untaxed areas through wealth taxes and a more progressive income tax system.