Re-imagining how we live together: Constitutional transformation

Home/Uncategorized/Re-imagining how we live together: Constitutional transformation 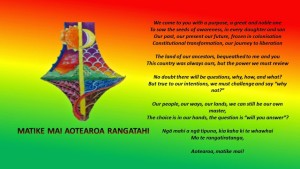 NZCCSS includes a commitment to Te Tiriti o Waitangi within its mission statement alongside the vision of justice and compassion for the poor and vulnerable in society. Understanding what Te Tiriti means for our work for justice 176 years af­ter it was signed is an ongoing task. A recent and valuable addition to understanding what Te Tiriti means for Māori and its implications for how we live together in this land, for how this country is governed has come from Matike Mai Aoteoroa, the Independent Iwi Working Group on Constitutional Transformation.

He Whakaaro Here Whakaumu Mo Aotearoa, the Working Group re­port, is a vitally important and timely document that approaches the meet­ing of Māori and Pakeha worldviews with a fresh and innovative view. Included in the terms of reference is the idea of transformation, which is understood as an ideal and revo­lutionary aim instead of change or reform. This gives us a context with which to reimagine the cultural and social landscape of our country. Te Tiriti is about relationship and so is a constitution.

Forming a possible picture of what constitutionalism could look like, and drawing influence from He Whakaputanga o te Rangatiratanga o Niu Tireni of 1835 (The Declaration of Independence 1835) and Te Tiriti o Waitangi of 1840, the report sets forth some clear suggestions and possible working models.

While recent Treaty claims settle­ments have been a welcome acknowl­edgement and offer some form of amends, much injustice and inequal­ity remains.

Matike Mai Aotearoa is about achieving constitutional transformation to bring together both Māori and Pakeha worldviews and will be seen as a significant work for a long time to come.

Extensive consultation across the country was undertaken between 2012–2015 and included 252 hui, written submissions, organised focus groups and one-to-one interviews. This process got to the heart of some complex issues and the outcome is a rich document of viewpoints trans­lated by the Working Group into ‘con­stitutional possibilities‘ to incorporate Rangatiratanga and Kāwanantanga‘.

The Working Group sets out 6 in­dicative models for further consulta­tion and states:

The first issue addressed in all of those discussions, and in this Report, was simply to state what should be obvious but has been denied and distorted for too long – that Māori, like all peoples, always assumed and gave effect to the right of self-determination. Within the territorial jurisdiction and sometimes the changing fortunes of Iwi and Hapū the people were self-governing.

The kaupapa underlying the suggest­ed indicative models is that Te Tiriti envisaged the continuing exercise of rangatiratanga while granting a place for kāwanatanga. It provided for what the Waitangi Tribunal re­cently described as “different spheres of influence” which allowed for both the independent exercise of rangati­ratanga and kāwanatanga and the expectation that there would also be an interdependent sphere where they might make joint decisions.

We call those spheres of influence the “rangatiratanga sphere”, where Māori make decisions for Māori and the “kāwanatanga sphere” where the Crown will make decisions for its people. The sphere where they will work together as equals we call the “relational sphere” because it is where the Tiriti relationship will operate. It is the sphere where a conciliatory and consensual democracy would be most needed.

By its very nature the idea of con­stitutional transformation seeks a profound change in the existing po­litical order. Any proposal of that kind therefore needs to address a number of questions about the grounds for change as well as the ways in which it might be implemented and be of ben­efit to everyone involved.