In response to the release of the latest Child Poverty Monitor, Prime Minister Rt Hon Jacinda Ardern  has re-stated her Government’s intention to legislate a set of targets and measures to reduce child poverty.

“I am ambitious for all our children. They are relying on the Government to make real change, and I am prepared to be held accountable for achieving it”

she said. More details are set to be announced in the week beginning 11th December.

Child poverty is down slightly from the previous year, but with 290,000 children in income poverty, there is still a lot to do. The proportion of children in poverty at 27% is still nearly twice the level it was 30 years ago (14%). If child poverty was at that level today, there would be 140,000 fewer children living in households with low incomes. 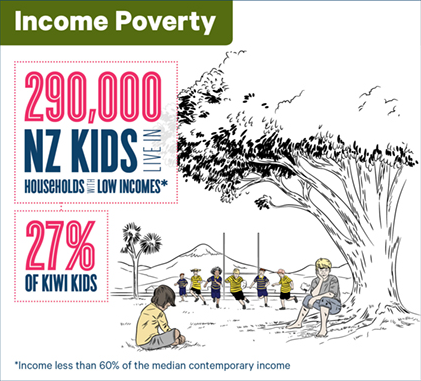 Small adjustments to benefit levels that came into effect in 2016 have helped reduce poverty and Children’s Commissioner Judge Andrew Becroft welcomed this “small step” in the right direction. “We can see for the first time some real progress towards wiping out child poverty, but it will take many small steps to get there.”

The bad news contained in the latest figures is that the number of children living in deepest poverty, that is with less than 40% of the median income, has increased significantly. Prof Mike O’Brien from the Child Poverty Action Group blames government policy, “The high and distressing rates of child poverty are primarily the result of a range of government policies which have treated children and families badly.”

Māori and Pasifika children make up some 60% of the children living in poverty. While this number is also trending down, advocate and educationalist Anton Blank  called for more effort to support education achievement for Māori children, with research showing that teachers’ low expectations of Māori learners helps create enduring patterns of underachievement.

The Working for Families (WFF) package excludes the lowest income families where no-one is in paid work. Changing WFF to include such families is estimated by CPAG to cost $1.2 billion per year but it will be a long-term solution to improve the well-being and outcomes for children.

Welfare benefits for a sole parent with 2 children under 12 remain around $30 per week below the level they were before the 1991 benefit cuts 26 years ago, according to the NZ Herald http://www.nzherald.co.nz/nz/news/article.cfm?c_id=1&objectid=11942879. Labour’s Families Income Package will add some $47 per week to the income plus the $700 per year winder energy payment ($13.46 per week). This will lift their income closer to the average wage than it has been for decades but once housing costs are included, it becomes harder to lift families out of poverty.

“If we are serious as a society about Christmas being a time for children, then the best present we can give them is for Government to commit to introducing and continuing a range of policies which will, over time, reduce these numbers significantly. ” Mike O’Brien, Child Poverty Action Group.