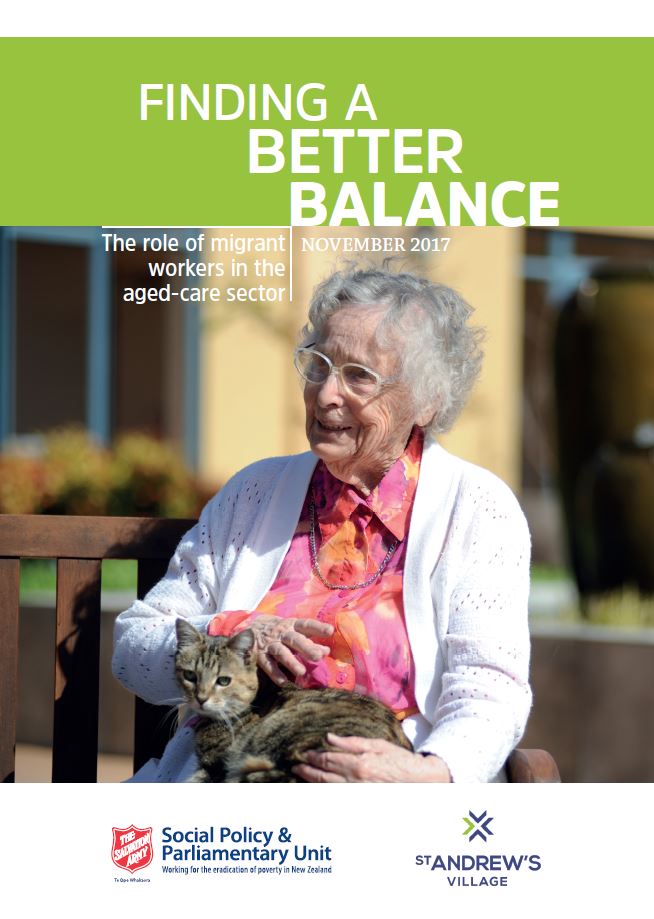 Aged care workers from overseas are among those affected by changing approaches to migration in this country. The aged care sector relies heavily on migrant nurses and healthcare assistants. Around a quarter of the nursing workforce is overseas qualified. A recent survey of some Auckland residential aged care providers found that one-quarter of their healthcare assistants were working on temporary so-called ‘Essential Skills’ migrant visas, according to a paper released by the Salvation Army Social Policy and Parliamentary Unit and aged residential care provider St Andrews Village on 4th
December.

The paper seeks to highlight the challenges that healthcare assistants from overseas face and suggest changes that would be fairer for the workers affected and better for the sector overall. Although many of the overseas workers have lived and worked in this country for a number of years, they remain in New Zealand on a sequence of short-term visas but are never able to settle here and feel as though they belong.

This is despite the fact that they have made an economic and social contribution to New Zealand life, sometimes for more than a decade There is a general shortage of workers in the sector which recent changes to immigration policy are making worse. Despite recent increases in pay through the pay equity settlement, residential aged care providers will continue to need overseas workers for the foreseeable future, because the demand for aged care and therefore for people to work in the sector is growing.

The report features several case studies of workers impacted by the changes in policy. People like Josie, who comes from the Philippines where she worked as a registered nurse. She has worked for more than 10 years as a healthcare assistant on a series of temporary essential skills visas and has qualified to Level 4 Healthcare Assistant. When her current visa expires next year, she will have to apply annually to renew it and after 3 years will be required to leave the country for at least one year. She wants to become a permanent resident but has been declined because of “lack of skills”.

Ed is also from the Philippines, has university level qualifications and has begun study towards a Bachelor of Nursing. He has also worked in New Zealand for more than a decade but cannot get permanent residency because of the low status given to his occupation. While there is undoubtedly a need to focus on bringing more New Zealanders into the workforce as healthcare assistants and nurses, it seems very clear that there the need for high quality workers such as Josie and Ed will continue for the foreseeable future. They deserve fairer treatment and one of the report’s key recommendations is that Immigration New Zealand immediately review the status of healthcare assistants under the current regulations.

The Minister for Immigration Iain Lees Galloway is reported to have said that he is reviewing the changes to visa rules introduced by the previous Government. He says that if there are genuine skill shortages then his government make sure employers are able to fill shortages with migrant workers. With wider issues around workforce skill levels and residency options complicating the picture, the aged care sector is needing this issue to be given priority for the sake of the workers and the older people they are working with.

Read the full paper on the Salvation Army website.