Is Housing A Human Right? 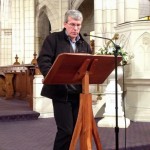 There is so much going on, so much to say about housing in this country, it is hard to know where to start. But I want to start at the place where the divine meets the ordinary. We are in a church, a sacred space, but the Christian tradition I come from tells us that if you really want to find God, you may well find that the divine presence is just as likely to be found wrapped in tattered rags lying in an old feeding trough in a run-down stable, or a in leaky garage, or on some sheets of cardboard piled together for a bed, or crowded onto a mattress with sisters & brothers in a damp, mouldy living room. I think, when we talk about the right to housing, starting among those who Jesus chose to be among and to call to follow him, those on the margins of society – that is a good place to start.

As the late Sir Paul Reeves put it: “The test of any social contract is the plight of the poorest, so we judge social policy not by its cost but by its impact on the poor, needy and marginalised”

Housing serves many functions: providing shelter, a store of wealth, a place of safety and security providing psychological and physical wellbeing, and a place to build social relationships (from Sally Keeling, Policy Quarterly Aug 2014). In many faith traditions and cultures the home plays a central role as a place of hospitality and shared ritual.

There are three things I want to say this evening:

Housing IS a Human Right

Article 25 of the Universal Declaration of Human Rights states that all people have the right to a standard of living adequate for health and wellbeing – including housing.

Human rights reflect the deep moral consensus of humanity and echo the foundational ethics of the great religions, captured in sayings such as the Golden Rule – “do to others as you would have them do to you” (Matthew 7:12).

New Zealand has signed up to the Declaration of Human Rights and many of the other agreements that lie under it. That means our Government is accountable to the wider international community for how it enables the fulfillment of people’s right to housing in this country.

Some European countries have made that right part of their law and research has shown that making the right to housing a legal right makes it harder to exclude vulnerable people. New Zealand does not have this policy – yet!

National Plan of Action for Human Rights – what does it say about housing?

In July the Human Rights Commission (HRC) released the National Plan of Action for Human Rights 2015 for the next five years. The cool thing about this plan is that it is not several hundred pages of print, with bullet points and recommendations that will gather dust or go out of date. No – it is an agile online app that is tracking the numerous commitments our Government has made to take action. It allows “real time” tracking of progress and can respond to developments in policy.

Taking a look at the app tells us a few things:

But there are significant commitments to take action to reduce child poverty – and all the experts agree that poor quality housing and high housing costs are the main drivers of child poverty and poor child health in this country:

In summary, the National Plan of Action looks perilously close to a national plan of inaction when it comes to housing but within the actual commitments made there is some basis to call our government to account on housing rights…

But does anyone really care? Who cares about human rights in this country? Let’s talk about changing the flag instead… or the All Blacks World Cup team…

How do we make the right to housing a reality in this country?

Well, the same way other other rights have been won, often through hard struggles over generations.

We need active policy to equalise our society to overcome these barriers of privilege and open them up to the whole population.

Women’s equality movement has been, quite literally in many cases, about opening closed doors – of the clubs and organisations and institutions where women were actively excluded & dis-empowered. It took  courageous leadership, changing in attitudes and many acts of protest and direct action as well as legislation.

The struggle for Māori land rights is also a story of long years of protest and challenge before meaningful legal changes came through the Treaty settlement process.

Housing is the place where inequality “hits home”

Housing is at the sharp end of inequality – it is the place where inequality literally “hits home”. It is a story of exclusion.

So – more than half of people renting in this country can’t afford the rent without government assistance. Most of those people are renting in our deeply unfair private rental market, only about one-fifth are in social housing. The worst houses in that market are the ones where the poorest on our community end up living. While the poor quality of Housing NZ houses in Auckland might be in the news at the moment, research has shown that people renting in the lower end of the private rental market live in the worse quality housing of all. Grotesquely – there may be hundreds of dollars a month being paid to subsidise these slum landlords through AS subsidies…. Our housing market is the graphic demonstration that a poorly regulated private market will fail the poorest in our community. There is no money to be made from the poor unless you cut corners, neglect repairs and maintenance while extracting the highest rent your tenants can bear.

A landlord’s survey undertaken a few years ago found that most landlords are your classic Mum & Dad landlords, owning fewer than 4 properties and treating it as their retirement investment. When asked what they liked least about being landlords, most replied tenants and property management! You have to ask why they are in this business – it makes as much sense as becoming a nurse when you can’t stand the sight of blood and hate shift work!

Social housing is the direct way that government supports vulnerable people to live in dignity but the real size of the social housing sector has fallen dramatically over the past 25 years.

There are 68,000 government owned houses (22 years ago in 1993 it was more like 70,000 but the population has grown by one million since then). The proportion of the total housing market that is social housing has halved to only 5% now. Similar countries like UK or France have three times as much social housing.

Philippa Howden Chapman and her fellow researchers at the Otago He Kainga Oranga/Housing and Health Research Project point out that introducing renewable tenancies into state-owned Housing NZ rentals since 2011 has created what is now an “integrated, insecure public/private rental market” including the most vulnerable and lowest income households.

The most vulnerable in that rental market are around 34,000 people (15,000 of them in Auckland) who are effectively homeless – which means sleeping rough, in improvised shelter, in unsanitary or over-crowded housing or simply no security that they can stay where they are. We need at least 12,000 houses now simply to meet this most pressing need! Bizarrely, many of those 34,000 people will not qualify to even get on the social housing register, the official waiting list for people in urgent or high need of social housing.

How many more social housing places are planned? Nobody can say even roughly but most likely it is not nearly enough. The picture is very confused as HNZ is getting rid of 8,000 houses – it is very hard to see where that number could be replaced, let alone significantly added to. There may be more social housing in Auckland – but again it is not clear who will build those houses and where. Housing NZ may add a few more than they have now in Auckland and there will be an additional 1800 social housing places there over the next 2-3 years – nowhere near enough.

Opportunities are being missed already:

Do you see the pattern? Grand talk of redevelopment, refurbishment of old and poorly aligned houses with new, “mixed” communities of social and private renters, community housing and private ownership. But the actual net result is fewer social housing units.

The community housing sector (made up of non-government housing organisations) wants to house 50,000 more people over the next 5 years (which would mean adding about another 15,000 units to the current 5,000) – and is in the process of working on a strategy to get there. But right now there are less than a thousand additional housing units set to be completed in the next couple of years. And there are major financial obstacles to be overcome before that five year goal can be achieved.

Not only do we need thousands more social housing units as soon as possible but we also need to improve the quality of the existing rental stock, especially in the private sector.

Right now new rules are being written for rental housing. The main changes are minimum insulation standards, requirements for smoke alarms and changes to the Tenancy Tribunal to help it work better and to help the government regulators to be more proactive in pursuing non-compliant landlords. The changes do not go far enough – they do not make it easier and safer for tenants to complain about poor standard housing, they set the bar for insulation too low and 40 years out of date, there are no requirements around heating yet it is the combination of efficient heating and good insulation that makes a warm dry healthy home.

How To Take Action 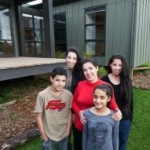 VisionWest family with their new home

We need a movement to support the rights of the disenfranchised. How can you can take action?

We know how to fix this problem – dozens of organisations and communities around this country are already showing us what works. Housing First is one label we give it – which means getting vulnerable people into stable housing, to create the place and the space to address the other challenges they face in life. And it works, as one person said:

“I don’t live in fear anymore. I know it’s cheap rent…so I don’t worry about getting evicted”

“I was like really stressed… now I have more hope. I can concentrate on finishing my studies and look at the future and be a better parent for my child”

So – invest government funding into expanding as fast as possible such programmes. Other countries have done this successfully, but it will take hundreds of millions of dollars of extra funding to build those vital housing assets that are needed.

I would like to see the various groups and organisations involved in representing and working with tenants and their communities working together and networking to strengthen their shared voice and experience. The voice of tenants is hardly heard in the din made by the middle class and the economists and property developers.

As Mahatma Gandhi said, “Be the change you want to see in the world”.