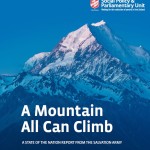 A quick overview of the latest Salvation Army State of the Nation Report  shows more thumbs up symbols than thumbs down. Does this mean things are getting better for the most vulnerable in our country? In vital areas like housing, child poverty and family violence, the answer is ‘not really’. When an improvement is from ‘D’ to ‘C-‘ is that really good enough?

Violence and neglect offences towards children are up and Major Sue Hay from the Salvation Army Policy Unit says:

“New Zealand still has a culture of violence where it is seen as more acceptable than it needs to be.”

While it is very welcome news that notifications of suspected and neglect child abuse have dropped, assaults against children have risen, leading to a ‘D’ grade for addressing violence against children. Recorded offences against children for violence, treatment, or neglect increasing 3.5% last year to 5,397 – 56% higher than in 2009. The only beacon of hope in this story is that perhaps such assaults are being reported more often, as people become less tolerant of violence towards children.

The Prime Minister has declared child poverty a priority (or is it “children in hardship” or, as the Minister of Social Development euphemises “children that are perhaps not experiencing the full life that we all want for New Zealand children“) and this report shows how little progress his government has made in its 6 years in office. Reducing the number of children in families reliant on benefits to 189,000, 40,000 fewer than 6 years ago, looks like quite an achievement – but what kind of achievement?

The question is  – are those children better off as a result? The overall child poverty figures are not dropping, with most child poverty measures showing no significant decrease since 2009, because it appears so many working families are also living in poverty. As Mike O’Brien from CPAG points out: says, “A fall in the number of families on welfare is not a reason to celebrate on its own without clear evidence that the children are better off because of it. A significant number of families experiencing poverty are in paid work (40%) so a reduction in the numbers on welfare may not mean any decrease in poverty. ”

So, while employment, average incomes, and food poverty have all shown ‘modest’ improvement, this is nowhere enough to overcome the huge problems of poverty and housing.

“We need immediate intervention, leaving it to the market is not working.” says Major Sue Hay. She is also skeptical about the Government’s proposed changes to social housing (see article ‘Show Me The Houses‘), which involves an increased role for charities and community providers and doesn’t look workable based on the detail released so far.

Read the full report ‘A Mountain All Can Climb’ on the Salvation Army website.