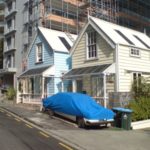 Housing is dominating the headlines as Auckland wrestles with the crisis of a lack of affordable housing to rent or buy and struggles to digest the enormous length and scale of the just-released Unitary Plan!

The Salvation Army’s Ian Hutson has reminded Aucklanders that they will need to pull together: “Inadequate affordable quality housing is the biggest social and economic threat Auckland faces. This plan gives Auckland a chance of eliminating this threat by ensuring the possibility of an adequate supply of quality affordable housing.” However, a real concern is the lack of requirements to include housing that meets the needs of low income and moderate income families, says Scott Figenshow of Community Housing Aotearoa.

Social services are there supporting people who face homelessness, sleeping in cars, garages or overcrowded houses as well as those struggling with poor quality and over-priced rental housing. Auckland’s Te Puea Marae amd Manurewa Marae have shown fantastic generosity and organisation to quickly respond to homelessness over the winder in Auckland. For those earning below average incomes, there is just not enough housing and not enough new social and community housing be being built. There are exciting new initiatives happening in many places and it is wonderful to see people moving into new houses in places like the Accessible Properties new homes in Glenn Innes and the new initiatives like the Christchurch Methodist Mission relocating five homes to Linwood to house young people who are homeless.

Prime Minister John Key has admitted that the government has to fill the gap but Community Housing Aotearoa has reminded him and other ministers about their selective logic in making capital funding available to actually build houses – more funding for community housing is desperately needed.

Social Housing Minister Paula Bennett has meanwhile thrown in some more funding of $9 million over two years to support up to 2,000 people who are homeless or at risk of homelessness. Part of the money is going to Housing First initiatives, no doubt ones like those supported through LifeWise and the Hamilton People’s Project. LifeWise’s CEO Moira Lawler weclomed the announcement as a “major step forward” in the work to end homelessness.