High poverty and inequality is the not-so-new normal. That is the conclusion to take from the latest poverty and inequality data released on 8th September in the Ministry of Social Development’s Household Incomes in New Zealand 2015 report. It echoes the experience of NZCCSS agencies reported on in the Vulnerability Report in June. A small downward trend in child poverty is, as Minister Anne Tolley said, “going in the right direction” but, as CPAG points out, this is far too slow, with 230,000 children still living in poverty. At 22% the child poverty rate remains at nearly double the 12% of the mid-1980s before the huge increase in inequality and poverty began. If New Zealand had that rate now we would have 100,000 fewer children in poverty.

The thirty-year story of inequality means an entire generation is growing up in a lop-sided society where a small group of wealthy people enjoy high incomes and increasing wealth at the expense of the rest of New Zealand.

Three key measures of inequality are up on the previous year and show inequality remains at record levels in New Zealand. Inequality measured by so-called Gini co-efficient, has gone back almost to the record high from 2011. The alternative measure, the so-called P90:10 ratio, is also up. A newer measure that New Zealand will have to report on as part of its international commitment to the Sustainable Development Goals, is the inequality goal that requires countries to increase the share on income that goes to the lowest 40% of incomes. In New Zealand this share has actually fallen below 20% over the past three years, which means inequality is rising. Taken together the message is clear – inequality is sitting around the record levels reached in 2011 and is not showing any sign of decreasing, and indeed seems likely to further increase. 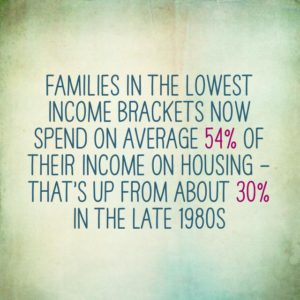 Housing costs are among the leading influences on the high poverty levels, as the Child Poverty Monitor, UNICEF and Every Child Counts have all pointed out. For people on low incomes it is rent costs that have the most effect on their poverty levels. Half of the 230,000 children in poverty live in private rental housing, another fifth in Housing NZ housing – that means seven out of ten children in poverty are living in rental housing.

The number of those children in most hardship (40% REL measure) is not decreasing and the main reason for this is that benefit rates are not increasing. The benefit increases from April 2016 are not included in this 2015 survey but even those small increases will not lift families out of the deepest poverty and no further poverty reduction policies have been announced since then. Added to that is the problem of low wages that mean four out of every ten children in poverty are in households with at least one person in full employment.