As signalled in both Policy Watch and Kete Kupu in July, Minister of Health Jonathan Coleman and Associate Minister of Health Sam Lotu Iiga rediscovered the idea of having strategies this year, with moves to review and review the NZ Health Strategy and the Health of Older People Strategy. 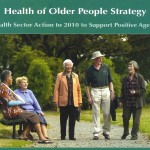 The current Health of Older People Strategy (HOP) was published in 2002, following the release of the Health Strategy in 2000. The Ministry of Health is leading the update, and as stated on its website, the intention is that the next HOP Strategy will provide a direction for future services to meet the health and disability support needs of older people, and the development of services in the medium term.

Unfortunately no evaluation of the existing strategy was ever completed or published, although, as we noted in July, the Hope Foundation published an evaluation of progress of the strategy by researcher Sarah Hood in 2010.

On 30 October NZCCSS provided a seven-page document of comments as input to the HOP Strategy review, with our guiding principle informed by our mission and the agencies with who we work, expressed firstly in this question:

What would a Health of Older People Strategy look like that is genuinely focused on responding to the situation of older people with a particular concern for those who are poorer and more vulnerable?

THE IMPORTANCE OF WELLNESS

In our comments we welcomed the focus in the draft Health Strategy on wellness and maintaining wellness and the initial message from the HOP Strategy team that “improved health and equity for all” is a driving outcome focus for the health and disability system.

We emphasized the importance within the HOP Strategy of using inclusive framing for overcoming the marginalization of vulnerable older people in society and increasing participation; with a particular emphasis on:

Our leading key message was that the HOP Strategy is being developed in a policy context that does not appear to prioritise the health of older people, given it does not feature as one of the top health targets. We flagged this as a “significant omission” and strongly recommended that Health of Older People be included as a key health target.

We also made the point that the HOP Strategy interacts with a range of other overarching or related strategies, such as the NZ Disability Strategy, and that new next iteration must specifically identify areas of alignment and areas where change may be needed.

On housing and older people, our main points were that this needed to feature more prominently in the HOP Strategy.

In our considered view the Social Housing Reform process has not made it easy enough for existing housing providers for older people to access government funding , nor provided the stable policy frameworks as yet that would encourage innovations such as intergenerational housing. We also advocated that the HOP Strategy needs to recognise the vital role of social housing, including local authority and community housing and all of the options provided by NZCCSS members in supporting older people to live well and as independently as possible.

One of the questions that the draft HOP Strategy prompted for us was that its proposed outcomes frameworks did not appear to given the same emphasis to older people participating in decisions about their health as set out in the current HOP Strategy.  We argued for a strong presence of consumer participation.

Similarly we argued for strong evaluation processes, noting that the current HOP Strategy does a poor job on that score – with reference to a feedback process in the sector being virtually non-existent.

In a broad comment we assessed that not enough has been achieved for Maori and Pacific older people, and that, more broadly again, the needs and aspirations for care and support for different ethnic groups, including Asian New Zealanders, needs greater recognition.

Under the heading of integration of services our comments expressed the frustration across NZCCSS networks at a lack of progress, and an undervaluing of integration that goes across primary/ secondary care and underutilizes aged care’s role in rehabilitation and regaining function.

Allied to this we made the point that blind tenders and competitive contracting work against integrated approaches to care and support, not aided by heavy documentation requirements.  And on the need for the HOP Strategy to clearly engage with the primary health linkage we posed three questions:

Lastly, and very importantly, we urged that more attention be given within the HOP Strategy to opportunities for communication and relationship building such as the active Elder Care forums seen in Canterbury.

We will all be on a ‘wait and see’ now for how the new HOP Strategy is finalised in 2016.