New Zealand has signed up to one target to reduce child poverty by half by 2030, but little progress is being made. It is time for the government to make a plan of how to reach this target, said Children’s Commissioner Andrew Becroft last week at the release of the latest  Child Poverty Monitor figures. The New Zealand Government has signed up, along with 194 other countries, to meet the United Nations Sustainable Development Goals. One of the 17 goals is a commitment to reduce all forms of poverty by half by 2030, which for New Zealand would mean a return to levels of poverty not seen since the early 1980s.

Since the mid-2000s progress on reducing child poverty in New Zealand has largely halted, as the graph below shows. To achieve the goal of halving poverty, there will have to be changes to the way the New Zealand government supports families with children. Auckland City Mission CEO Chris Farrelly speaks for many of us working with struggling families and their communities when he says that poverty has hit a crisis point and we need to take action as a country. The NZCCSS Vulnerability Report series reported how little progress has been made in recent years to reduce poverty and this led NZCCSS Executive Officer Trevor McGlinchey to say that “Government must provide greater income to poor families, whether they are in work or on a benefit”. 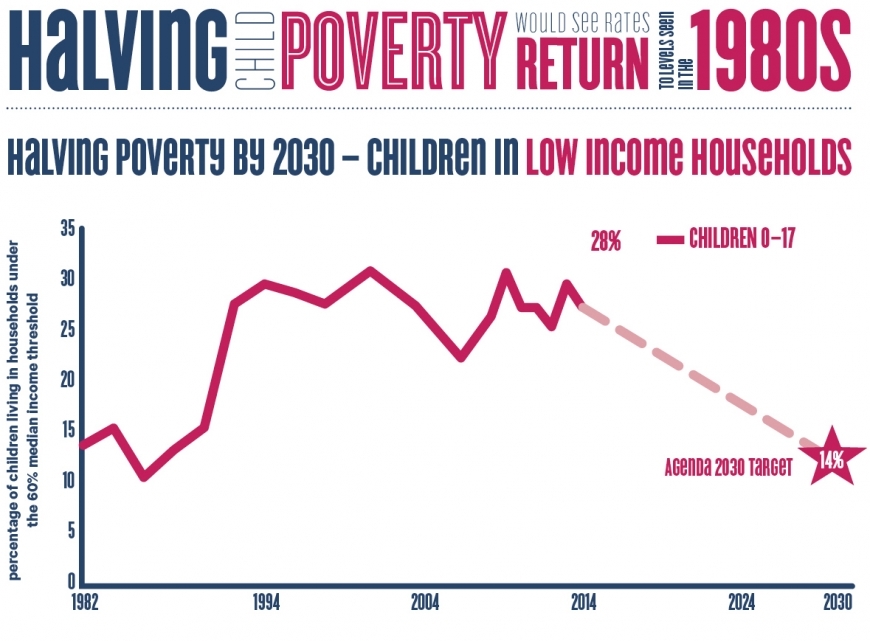 Some steps have been taken, such as the one-off increase in welfare benefits that came into effect in April 2016, but to really reduce poverty, more will have to be done. In June 2016 the Government described the actions it is taking to reduce poverty in its report to the Ministerial Committee on Poverty. That report limits itself to simply listing the various activities the Government is involved in without making any clear links to how those activities will actually reduce poverty overall. It is difficult to gain any sense of whether all the activity that is listed is achieving progress or whether the amounts being spent or “invested” are actually sufficient to overcome the extent of the problem that our communities are facing.

In places where targets have been set, such as child immunisation, participation in early childhood education or reducing benefit numbers, some progress has been achieved. There can be some confidence that more children immunised against preventable illnesses and more children having access to good quality ECE will help those children to have a better chance in life. On the other hand, reducing numbers of people on welfare benefits in itself achieves nothing, if there is no clear evidence that those no longer receiving a benefit are actually moving into good, sustainable employment that lifts their income. If people no longer receiving the benefit  are simply being driven away to fend for themselves without support, then that cannot be counted as a success in reducing poverty.

The Childrens’ Commissioner has repeated the call for the Government to develop a proper plan to reduce poverty and achieve the goal it has agreed to in seeking to halve poverty in the next 14 years. New Zealanders have consistently identified poverty and inequality as one of the biggest problems (see the October 2016 Roy Morgan poll) facing this country and a government that commits to such a plan is sure to find strong support.