Giving Care Work Its Due

Home/Uncategorized/Giving Care Work Its Due

Yet another carer pay court case has won in the Employment Court. This time it is for home care relief worker Jan Lowe who worked in the 1990s providing 24 hour care relief breaks for family carers. The challenging work with people with Alzheimers or other disabilities was paid on the basis of an “allowance” of $75 for 24 hours ($3 an hour). The Employment Court has ruled they were providing a service to the Ministry of Health and thus were eligible to the minimum wage and holiday pay.

Coming after the “sleepover” settlement for disability carers, each decision helps to build the case law that gives full recognition to the work of caring and offers the chance to ensure people doing this work receive a fair wage. As with the “sleepover” case, the onus is on the government to come up with a settlement with the workers that is fair to them. It is to be hoped that the Court’s decision will not be appealed by the government, but rather a negotiation process is undertaken to settle the issue.

The ‘In-Between Travel Time Settlement’ for home and community support workers could serve as a model for this, with the Government, Ministry of Health working through a process with sector employers and workers that offers real hope for better working conditions, training and appropriate funding models. 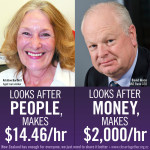 Similarly, it is hoped that the government will not go down the path of trying to legislate out of a settlement in the Equal Pay case for rest home care worker Kristine Bartlett. Shortly before Christmas the Supreme Court refused the petition from employers TerraNova to appeal the Appeal Court decision, meaning that a process needs to be found to work out principles to assess a comparable form of work done by men with the same or largely the same skills and compare pay rates.

The ongoing injustice this legal action is lack of pay equity – the fact that women’s work is less valued and therefore paid less than work dominated by men. Aged care is one place where this difference is most acute. The government funds the aged care sector on the basis that it pays care workers considerably less than if those care workers were directly employed by the government (e.g. working for DHBs).  The different in hourly rates is said to be in the order of $2 per hour. Aged care sector magazine InSite reports rumours that the government is considering changing the Equal Pay Act in response to the court decision. Human Rights Commissioner for Equal Employment Opportunities, Dr Jackie Blue, convenes the Caring Counts Coalition that NZCCSS is part of and she has made the offer to government to help develop pragmatic and sustainable solutions that work for everyone involved.