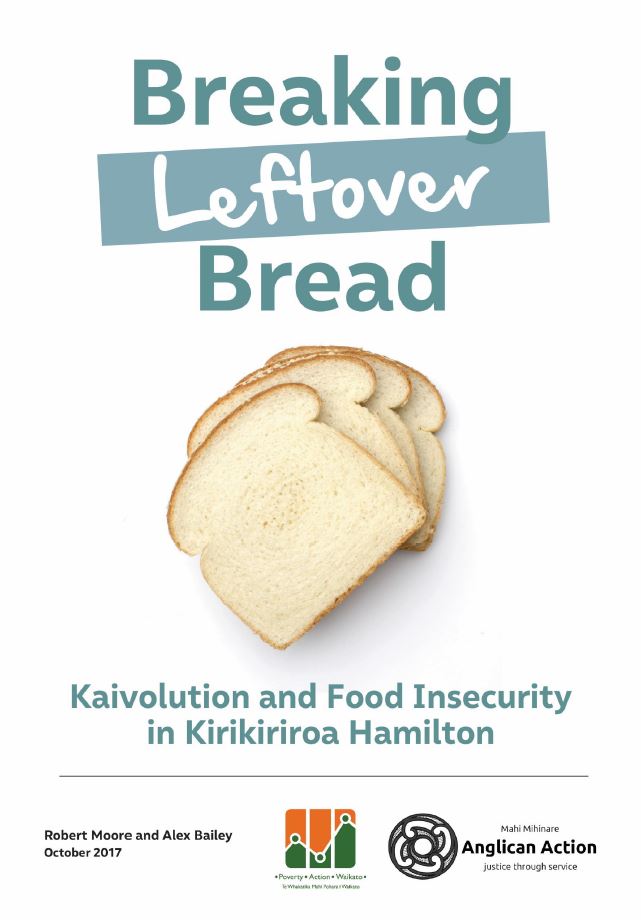 Food rescue organisation Kaivolution is an example of the ways people in communities around the country are responding to food insecurity. When people do not have access to good nutritious food to meet their needs for an active and healthy lives – that is food insecurity.

“Food is the easiest thing to control. Food is the thing you can choose not to spend on”

Families respond by cutting back on food and/or buying the cheapest foods which are mostly the least nutritious – high in sugar and fat. Hunger and obesity are the parallel products of poverty and food insecurity.

Kaivolution works with a team of 65 volunteers to support 75 charities in Kirikiriroa/Hamilton and is supplied by 43 food donors such as supermarkets. It rescues the equivalent of 42,857 meals per month in food that would otherwise be thrown away. So food is distributed to those who need it and at the same time the equivalent of 28,500kg in greenhouse gas emissions reductions are achieved.

The good news is the way the ‘no questions asked, blame free, source of food’ is helping foodbanks, churches and other community groups provide practical help and space for manaakitanga and hospitality for those who are struggling to feed themselves and their families.

But, as the researchers ask, “Is charity enough?” The answer clearly is ‘No’!

We are using a triage model, our way of doing food assistance is the model used in the aftermath of disasters. Are New Zealanders constantly living in a state of disaster?

That is one of the responses recorded by the Poverty Action Waikato researchers Robert Moore and Alex Bailey in their interviews with 13 organisations working with people in need of food. They are among the many Waikato groups working with food rescue organisation Kaivolution.

Their report, Breaking Leftover Bread, released in November, sets out to tell the story of food poverty, hunger, poor nutrition as well as the generous and creative responses emerging in the Kirikiriroa community.

The unfair structures of our wage, welfare and housing systems are causing the low incomes that lead to so many people experiencing into poor nutrition and hunger.

Wages for low income earners have not risen as fast as rents and food prices and government welfare policies are identified as a key reason why people are not getting enough to eat. Welfare benefits that are too low combined with restricting access to additional help such as food grants.

The report records the shame associated with asking for food, which means people often simply do not ask for help as soon as they should.

On the other hand, Government agencies are now routinely sending people to foodbanks for food and refusing special needs food grants. Statistics on food grants have reduced over the past seven years even as foodbanks report increasing demand for food parcels.

Fairness and justice requires that these structural causes of poverty be addressed, through higher benefit levels, more affordable housing and better wages. That is the task of the Government – to do its part alongside the community level responses.

Read the full report on the Poverty Action Waikato website: