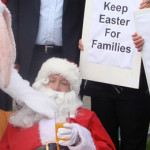 Local body elections are one place where people can test candidates and influence councils about their position on Easter Sunday trading, now that those councils have been made responsible for making the decision.

Despite a late flurry of lobbying from well-known figures like All Black great Michael Jones and boxing legend David Tua, National MPs all voted in late August for the new Shop Trading Hours Bill to become law, despite it being officially a conscience vote. A number of prominent Natonal MPs have had some serious changes of heart, such as the Minister sponsoring the Bill, Michael Woodhouse and Whanganui MP Chester Borrows, both of whom have previously voted against such legislation. You can read the debate about the Bill on the Parliament website and the Open All Hours page gives a very good summary of the issue.

It will now be up to local councils to set the rules about shops opening on Easter Sunday, which is likely to create a “mish-mash” of approaches between localities. The Mayor of Rotorua welcomed the change as suiting their tourist city but the union movement opposed the Bill as being bad for families. As Caritas pointed out in their submission on the Bill, it will be challenging for workers who do not wish to work on this day to stand up for their rights. NZCCSS and the Salvation Army also opposed the Bill appealing for protection for this day that holds a great deal of religious significance for hundreds of thousands of New Zealanders (check out our earlier Policy Watch posts on this issue). You can read more about the new law that comes into effect for Easter 2017 on the Ministry of Business, Innovation and Employment website.

Organising local responses to attempts by local councils to introduce Easter trading with now have to be the focus of those who do not support Easter Sunday being open for business.