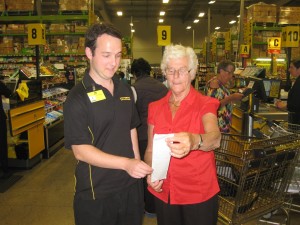 One of the strategic imperatives for 2015-18 of NZCCSS is “to bring the lived experience of poor and vulnerable people to the attention of our wider communities.” In some cases this occurs when community organizations take responsibility in very specific ways for helping people who are struggling to make ends meet and use their own resources to assist those whose lives are marginalized.

One organization which supports people who are poor and vulnerable is the Lower Hutt Food Bank. It was opened in 1986 to provide an easily identifiable centre where people could find relief. Initially it was run by a local Methodist church which provided a room and volunteers. After that the Hutt City Council provided premises, power, rubbish collection and other services. Now the food bank is independent, relying on grants, donations and the good will of the community.

During December 2015 there were several community institutions which supported the Lower Hutt Food Bank, most notably Hutt City Libraries and Pak n Save, Petone.

The public libraries agreed to waive fines for overdue items during the month of December in return for donations of groceries. The rate was one tin per $5 fine. In fact, some borrowers contributed more than was needed just to cancel their fines and library trolleys soon piled up. Manager, Sandra Mann and her staff confirmed that the libraries waived over $23,000 in fines and as a result several heavy carloads of groceries were driven across the city to Dudley St in the lead up to Christmas and New Year.

Another project to support the food bank was initiated by Pak n Save, Petone. Most Hutt supermarkets have drop boxes where customers can leave donations of groceries. These boxes are regularly cleared by volunteers who ferry the contents to the Dudley St depot for distribution. However, Pak n Save, Petone introduced a new feature by launching a “special” for three months until the end of December 2015 so that groceries left in the drop box were scanned and Pak n Save generously matched their total value, dollar for dollar. As a result, manager Ben O’Sullivan presented the food bank with extra credit of over $7,000.

Supported by these two initiatives, people who are sick, injured, unemployed, violently abused or suffering from other kinds of shock received some extra food parcels last Christmas. These two programmes deserve the recognition and thanks from the Hutt community for their creative response towards helping people who might otherwise have had less than most during the festive season.