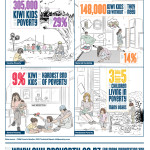 The Child Poverty Monitor 2015 has been released and despite some focussed work across NGOs and Government, the number of children and young people living in poverty [where family income is 60% of the median income after housing], went up by 45,000.

The Children’s Commissioner, Dr Russell Wills, thinks the missing piece to bind all of this good work together is an ‘overarching plan with child poverty targets’.

NZCCSS agrees and we don’t need to look any further than the work undertaken by the Expert Advisory Group on Solutions to Child Poverty, Co-Chaired by Jonathan Boston and Tracey McIntosh, to get the plan and targets actioned.

The first step: We have recommended that governments adopt a strategic framework for addressing child poverty issues and ensuring accountability for outcomes. This includes the enactment of legislation requiring the measurement of child poverty, the setting of short-term and long-term poverty-reduction targets, the establishment of various child poverty-related indicators, and the monitoring and regular reporting of results. Report on Solutions to Child Poverty. Evidence to Action [vii].