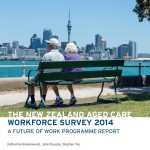 Aged care workers in home support and aged residential care love their work but are concerned about the pressures of their work and the low pay. AUT researcher Dr Ravenswood describes the typical aged care worker as “female, aged over 45 and is the main earner for her family but she earns $15 or less per hour”. The Auckland University of Technology report on the 2014 Aged Care Workforce Survey was released on 28th April 2015. They surveyed nearly 600 people working in home & community support and around 300 people working in aged residential care. The report is focused on the workers’ experience and they note that, although they sought responses from managers in those areas, there were “too few responses to draw meaningful conclusions”. The report’s authors aim to provide a benchmark of the workers’ experience and situation against which future changes can be measured.

The context for this work is the expected shortfall of care  workers in the future as more and more people are living longer. At the NZCCSS conference in 2014  ([wpfilebase tag=fileurl id=1173 linktext=’Policy Preparedness F…’ /]) DHB CEO Chris Fleming pointed to the huge gap between expected demand for workers through to 2025 (3.2%)  and the projected growth in the overall workforce (0.6%), meaning there is likely to be a shortage of people willing to work in the sector.

What happens when the main earner can’t earn enough?

More than half of the home care workers surveyed (56.9%) and nearly two-thirds of the residential aged care workers reported that they are the main earners in their families, which emphasises how important their incomes and work conditions are for those families. Most care workers are employed as permanent full or part-time (home support 82.6%, residential 84.4%). Nearly half (43.1%) of care workers reported working less than 20 hours a week and nearly three quarters (73.3%) were on hourly rates less than $15.In contrast, Most aged residential care workers (69.9%) worked more than 30 hours a week, most earned between $15 – $19 an hour although just over a third (37.7%) earned less than $15 hour. Not surprisingly, almost all carers, home or residential, say they are not satisfied with their pay.

While the majority of people reported satisfaction with their job and the amount of freedom they have in how do go about it, there is a very significant group that did not feel their work environment and relationships with management and colleagues was good enough. Most of those surveyed had completed training (home support 78%, residential 82.6%) and felt they had sufficient skills to do their job. Although a significant proportion of carers reported that they often experience physical and verbal abuse from clients or residents, most are satisfied with the work itself and many enjoy the flexibility the work offers to fit around their other aspects of their lives.

What is happening to address the workforce challenges highlighted in this report?

One conclusion to take from this survey is that lifting wages in the sector (e.g. closer to the Living Wage of $19.25) would make it a much better place to work and more attractive as a choice for people looking to use their people skills in a role that is flexible enough to fit around family life and other out of work activities.

The chief obstacle to further developing a workforce largely funded through the Government health budget is the on-going cumulative funding squeeze as over the past five years or more, the health funding to DHBs has been declining in real terms and not keeping up with costs and demographic growth, meaning DHBs are searching desperately for savings.

As many commentators have pointed out, the investment in improving the work conditions including pay levels of the estimated 75,000 carers working in the sector would have benefits right across our communities. In our November 2014 Kete Kupu NZCCSS (see article ‘Pay Equity & the Services for Older Sector’ p.4) set out its view on the way lifting wages is an investment in wellbeing for workers, their families and the older people they support. Adding a significant extra amount to health expenditure to help ensure that people and their communities are well supported would be a great example of wise social investment.