Best Place in the World To Die?

Home/Uncategorized/Best Place in the World To Die? 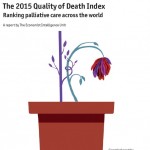 An international study has rated New Zealand as the third best place in the world to die. The Economist magazine 2015 Quality of Death report ranked 80 countries in five areas of end-of-life care. New Zealand was highest ranked for community engagement but ranked lower for other areas such as healthcare environment, affordability, human resources and quality of care. Only the United Kingdom (1st) and Australia were given better overall ranking.

The overall result of the study shows that wealthy countries with high incomes are the best places to die in, especially in providing basic pain management, but some of the lower income countries like Panama, Uganda and Mongolia are doing really well despite many constraints on their health systems.

Looking ahead to future demand for end-of-life care the report includes an assessment of the relative capacity of countries to respond to future need. This is summarised in a table mapping the level of provision of palliative services in a country against expected future need. Future need is driven by three main factors – speed of population ageing, the ratio of older people to working age people, and the burden of diseases needing end-of-life care (e.g. cancer, Alzheimers). The good news for New Zealand in this analysis is that we are among the handful of countries best positioned to be able to meet these future needs.

Aged residential care (e.g. rest homes, dementia units and continuing care hospitals) are the places where nearly half of people aged over 65 will die in New Zealand, according to recent Auckland University research. This makes the work around palliative care very important to NZCCSS agencies working with older people in aged care and their families and whānau. In addition to this, many of the NZCCSS social services are involved in supporting older people in the community, including those in the end-stages of terminal illness.

Review of Care for Those with Terminal Illness

The international comparisons in the Quality of Death report provide some background to the Government’s Review of Adult Palliative Care Services  (the Review) announced in late August. This Review is only one of a number of things happening in palliative care that will be important in shaping support for people with terminal diseases over the next few years.

The review is tasked with looking at current capability and capacity, the projected future need, gaps and barriers in current services, how to develop the workforce and ensure equitable access to services and how to improve quality of services within existing funding settings.A final report from the Review is scheduled for September 2016.

The Review does not include in its scope the legal status of voluntary euthanasia, which is the subject of a separate Parliamentary Select Committee inquiry (submissions on this close 1 February 2016), nor does it cover palliative care for children or those with chronic “life-limiting” diseases who are not in end-of-life care.

The Review is also separate to the roll-out of the additional $76.5 million in palliative care funding over the next four years announced in the 2015 Budget. The funding includes $13 million per year for 4 years in extra funding direct to Hospice NZ. A further amount of $3.1 million in 2015- 2016 and $7 million per year for the following 3 years was intended to fund 60 extra staff who will also be supporting aged residential care, home based support and primary care services.

The work on developing proposals to use the extra money has been going on over recent months between Hospice NZ, DHBs and the Ministry of Health.

It is pleasing to see the level of serious attention being given to support for older people and their families and whānau. There are new issues and challenges emerging for residential aged care and home support as people live longer in the community and tend to enter higher level care at a more advanced level of need, often at a quite late stage in a terminal illness. The Review and other associated work will need to address these challenges among the many other issues facing end-of-life care in this country.