A triumph for human dignity and equality 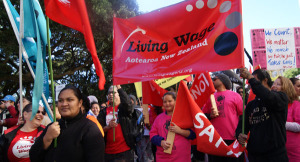 “A living wage is the income necessary to provide workers and their families with the basic necessities of life. A living wage will enable workers to live with dignity and to participate as active citizens in society”. Charles Waldegrave and Peter King

This week Wellington City Council (WCC) has voted 9-6 to extend an $18.55 (per hour) living wage to contracted security workers.

It wasn’t all plain sailing though with some councillors and internal policy staff worried there wouldn’t be enough money in the kitty and ratepayers would suffer.

Max Rashbrooke’s opinion piece and blog page put pay to this with a convincing argument for:

a) more restraint at the higher end of salary pay outs, and

b) a broader definition of cost-effectiveness so that factors such as higher morale, less turnover and greater productivity are included in the analysis.

At the end of the day regardless of personal politics, values and skill level, if you go out to work and fulfil your work obligations you are entitled to be paid at a rate that enables you to meet your ‘essential’ human needs and those of your children.

The affordability of the living wage is not at the heart of this debate but how much we value each other and the different contributions we all collectively make to the success of this country.

Over the years the Vulnerability Report series has captured the reality of low wages on the health and wellbeing of families. If we are serious about addressing child vulnerability, supporting vulnerable young people and reducing youth crime, we need to join the dots to the living wage movement and increase family income to improve the economic conditions of our most vulnerable citizens.

The Dominion Post’s Editorial picks up on the international trend to implement living wage policies and the broader benefits to individual workers and the economy.

Mayor Wade-Brown says cities worldwide that have led with applying a living wage have found that the workers who benefit tend to spend any increases locally.The local community as a whole benefits, economically and socially.

Paul Eagle thinks the decision is ultimately about human decency.

The Chamber of Commerce has concerns the payment of a living wage will create a significant cost to the council ($2.4 million across the seven-year life of the contract).

The New Zealand Tax Payers Union is horrified by the decision and thinks it is probably illegal.