2016 State of the Sector Survey

Home/Uncategorized/2016 State of the Sector Survey 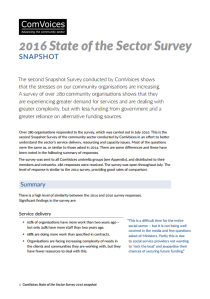 The survey of 280 community organisations provides an insight into how they are coping in an environment of greater volumes, complexity but less funding.

Some key findings raised in the report.

“The main issue for a lot of the organisations is that they’re having to do more with less, and a number of them have not have had a funding increase for between eight to 10 years, and that’s if they have government contracted funding and that’s across the board regardless of who the funder is. With funding restrictions on services, what it means is that organisations have to reduce their budgets and often the main way they can do that is reduce the number of staff they have, which if you also have greater demand for services, that puts extra demand on the organisation.”

Minister for the Voluntary and Community Sector Jo Goodhew has acknowledged the report and issues raised in the survey saying:

“funding has been tight for quite some time.I’m certainly not able to give any blanket assurance that there is a light on the horizon, but I do want to assure Comvoices that this a useful survey for us to look at, and that what it raises is certainly replicated in the conversations that officials from our various government departments are having with the providers.”