Working together on a big issue

Home/Uncategorized/Working together on a big issue 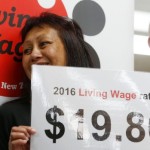 The Wellington Chamber of Commerce has decided not to pursue legal action against Wellington City Council over its living wage policy.

Instead a joint statement has been issued saying legal proceedings had been halted and they were working towards finding a way to pay contractors the living wage that was acceptable to the council and the chamber.

“The people of Wellington will be pleased that the democratic decision of council to value these workers by paying them the living wage, made nearly five months ago, will now go ahead….. there was still work to do to ensure those in council-controlled organisations, and other council workers employed via WCC contracts, got the living wage.

But today we celebrate the fact the WCC will now extend the living wage to council’s security and noise control workers who are amongst the lowest paid workers in Wellington city,”

Triumph for human dignity and equality